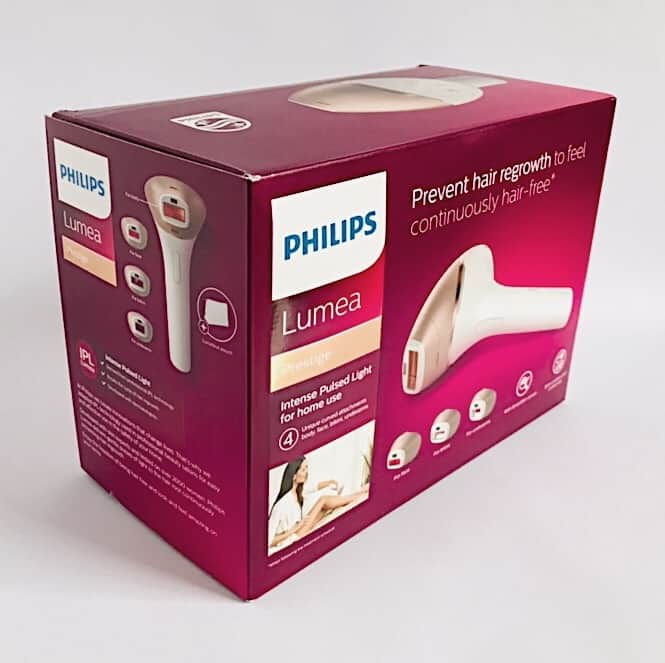 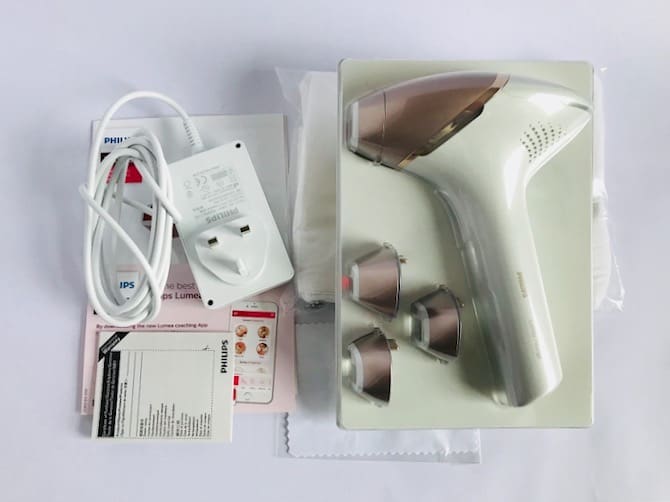 Philips is a world-class company, and the Lumea is a solid product. The manufacturer claims it will deliver a minimum of 250,000 flashes. That translates into over 15 years of full-body treatments. It comes with a full 2-year warranty, and Philips has a good track record for repairs should you need them.

This is the latest in a series of IPL devices from Philips and the first IPL device I have used. Unlike waxing or epilating, IPL devices do not directly remove hair. It is similar to laser hair treatments which prevent hair from growing and, hopefully, regrowing. Philips claims the Lumea has kept people hair-free for up to six months!

"IPL" stands for Intense Pulsed Light. This is not the same as a laser. Lasers are a single "color" or frequency of coherent light, while IPL is composed of many different colors or wavelengths. It works like this: you hold the Lumea against your skin, and it flashes. The light heats the hair (like the sunlight heats you), which heats the hair follicle. That causes the cells responsible for hair to shut down and enter a resting phase. Over time, the cells can become damaged enough that long-term hair reduction is possible. The details are interesting, and I've written a short piece about it here.

Who can use it?

IPL treatments don't work on everyone. Whether or not it will work depends on your skin tone and hair color. Philips gives the following chart of skin tones:

The Lumea is considered safe to use only with the first five. The Lumea will refuse to work on people with skin type VI since they can have serious skin reactions, such as hyperpigmentation, hypopigmentation, or burns. Skin type VI's are the lucky people who rarely or never get sunburn and develop very dark tans.

The Lumea works on black to dark blonde hair. It won't work on light blonde, red, or greyish/white hair. It is most effective on skin-type I with black hair. The farther you move from that ideal combination, the more slowly it will work!

Another thing that might prevent you from using the Lumea is safety concerns. In Philips' opinion, a long list of medications, pathologies, and skin conditions could modify your use of the device or even make it unwise for you to use it. It's probably a good idea to investigate this before spending all this money. You can find the details at the Philips Lumea FAQ.

Of course, whether any of these concerns is medically warranted or corporate butt covering is up to you and your doctor to decide.

How you use it.

Read the manual first. There's some good info there. And Philips recommends a skin test. Once all of this is out of the way:

I wrote this review in January 2020, just a month after starting with the Lumea. I was already happy with the Lumea, and I've only become more so since then. Philips recommends a schedule that starts with a treatment every two weeks, then four weeks, and so on. I still use the Lumea monthly, but there are so few hairs that it almost doesn't seem worth it. There is no hair growth for many parts of my body, and I do not bother to treat those regions. SheDaddy, who has the beautiful copper skin of Romainian women and dark hair, has had a similar experience.

Unlike SheDaddy, I have Type I skin (very fair), but dark hair. That's considered the "sweet spot" for this kind of treatment. If your hair is lighter, you might have a different outcome.

UPDATE: Is it worth the price?

Obviously, the Lumea is expensive so let's deal with the big gorilla in the room first. If you are currently going to a professional for monthly waxings, it's an economic no-brainer. Two months of full body Salon waxings would pay for the Lumea. If you are self-waxing or epilating, then the Lumea is way more expensive.

So it is a bit of a luxury item. I am thrilled with the Lumea, and it was worth every penny I paid for it. I bought the Lumea. The big problem with the Lumea is the price. I am happy to be freed from the painful hours I spent epilating or waxing. I spend much less time now, and I get superior results.

Speaking of the price, I bought the Lumea on Amazon, but it doesn't even have a page there at the moment. It is still offered for sale by Philips, and other shops carry it. I also noticed that there had been an explosion of IPL devices since I bought my Lumea. There are many on Amazon and elsewhere. I urge you to investigate these new products since they are substantially cheaper and might deliver similar results.

The two questions I get from people who find out I'm using the Lumea are: (1) Is it heavy? and (2) Does it hurt?

It is on the heavy side. According to the manual, it weighs in at 560 g - that's a bit over a pound. That does sound like a lot but keep in mind that you will mostly be resting it on your body - you aren't holding it in the air, unsupported, with one arm. So, basically, not a problem. Most of the weight appears to come from the lithium battery. I don't know if the device would work without that, but probably. If so and the weight bothers you, you could remove the battery and use it with the power cord, which I do anyway.

It hurts some of the time. I use the Lumea at its highest intensity, and most of the time, it is completely painless. Occasionally, I will get a little "ouch," similar to what you might feel if someone snapped a rubber band against your skin. It hurts slightly, like a pinch, but not much.

Good luck with your decision. I'm very interested to hear about your experiences if you decide to try an IPL device, so please let me know how it goes! Thanks for reading!