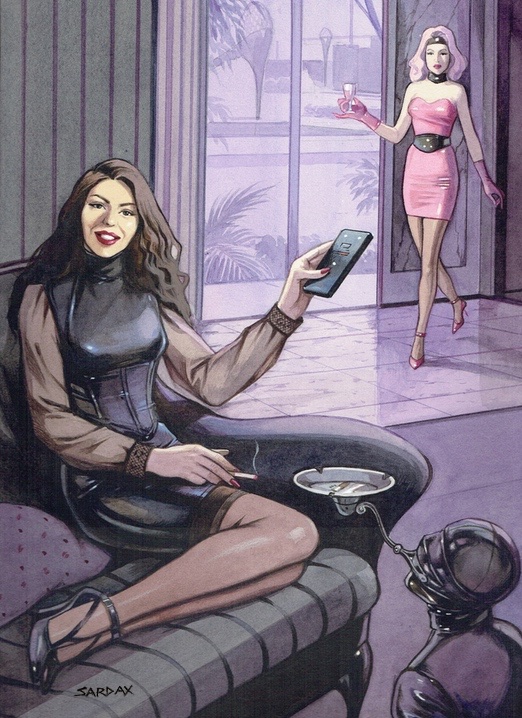 This is the second painting I've commissioned from Sardax as a gift for my precious SheDaddy. The first arrived on the occasion of our 10th Anniversary, and you can read about that one here. We love Sardax's work, and it's a thrill to own two of his beautiful paintings with ourselves as subjects!

Sardax doesn't do commissions very often, so it's a little unusual to get a second one this soon. The only reason it happened is that we had a small misunderstanding regarding the previous one. I asked for a color painting, but that request got overlooked in the flurry of emails. He created a brilliant black and white painting, and I loved it instantly. But I still wanted one of his beautiful color paintings. Sardax felt bad about the confusion, and I had the temerity to suggest he could make it up to me by reserving a slot for a new commission for 2022. He agreed to this, like the true gentleman he is, and now, one year later, we have this beautiful new work!

The commission process was similar to last time. I wanted something that would reflect our life, and the events of the past two years had made it hard for us to see each other. That's where the idea of "control from a distance" started. Sardax suggested a puppet theme: myself as a puppet with the strings held by SheDaddy's hands. She liked that idea but suggested the sci-fi theme with the futuristic robot Pammy. Sardax fell in love with that idea.

As before, Sardax took our vague notion and ran with it. He added the futuristic landscape, the luxurious setting with the ashtray slave, and the control bands on my body and sent us a sketch in short order. The sketch had all of the elements you see in it today. We suggested adding a task for Pammy (in the sketch, she is just wandering around looking blank). I also wanted larger breasts. Sardax was fine with our suggestions, and we received the near-final version shortly after.

However, Sardax was not happy with his rendering of SheDaddy's face and wanted to work on it some more. I was concerned that the piece would lose its freshness and look overworked. But I needn't have worried. After several days of work, he sent us the perfected portrait, and that's the one you see before you today. I was amazed! Such devotion to a standard is the province of the truly great. It is no wonder that his work is admired and loved all over the world! The more I learn about Sardax, the more I admire him.

The portrait arrived in Romania shortly after that. My beautiful SheDaddy was delighted with it, as you can see from the video. Once she finds the perfect frame, it will sit in an honored place next to its sister from last year.