When I first wrote this article, I was shopping for new breast forms. I'm still happy with the RealGurl Breastplate I ultimately ended up with, so I'm not currently in the market. Realistically, if I want a breast form upgrade from here, implant surgery would be the logical next step for me. But as I redesigned the website, I couldn't help but notice that some articles were outdated! The breast form market has transformed itself in just a few years!

Four or five years ago, there were essentially three tiers: there were cheap plastic bags filled with silicone, with no nipples and very little to no shape for around USD 100 or a bit less. They were probably made in China and didn't have any particular branding. They were ugly. Hideously ugly.

Then there were the higher-end models, costing a few hundred dollars. Some were better-made plastic bags filled with silicone, and some were solid silicone. Some of them were customizable with attachable nipples. The better brands made breast forms in different colors to accommodate different skin tones.

And then there are the super high-end brands; this niche still seems to be occupied only by RealGurl. Much greater skin tone and appearance customization are possible but at a much greater cost.

Revisiting the scene today, there seems to have been an explosion of activity in the breast form market. The quality of the lower-end offerings has improved dramatically, and the prices have also come down. And there are a lot more companies. The ugly silicone baggies have completely disappeared. It's wonderful!

There are also more improvements in the mid-range market. There are more products, and they look interesting. The prices haven't changed that much, but it seems you can get more for your money. As far as the high-end market is concerned, my hopes from a few years ago that RealGurl would face serious competition have yet to materialize. They still seem to be the only players in that market niche. Let's hope for more competition there also!

This has two parts: band size and cup size. The band size is essentially a measure of how large your chest is, and the cup size, or how big the breast is that fits in the bra.

To measure your band size, take a tape measure, fit it around your chest where the bottom of a bra naturally lands, at the most slender part of your bustline, usually 5-7.6 cm/2-3 inches below your nipple, and note the measurement. Keep the tape level, and don't make it too tight. If you see skin folds over the tape measure, it's too tight. Write down that number. Do the same thing with the tape at the biggest part of your breast line - usually over the nipple but not always. Do this even if you don't think you have breasts. Write that number down. You use this to pick the style of the back that will work best for you.

What your mother (or your father, if he wore bras) would do now is to take the first number, and if it is odd, add five. If it is even, add four. This procedure is called the "+4 rule," and generations of bra wearers have sized bras using it. But today, the entire bra-wearing world is in an uproar about the +4 rule. You might think we could agree on how to size a bra, but no. The argument is that the stuff they made bras out of in Mom's and Dad's day isn't as flexible and space-agey as the stuff they use today. So we don't need this old +4 stuff anymore.

Reading about this on the web and asking my cis female friends about it has only increased my confusion. Many have found true bra happiness for the first time in their life by avoiding the +4 rule. At least as many women have ignored the +4 rule and found that their new bra doesn't fit. Perhaps the most shocking thing is that world leaders continue to ignore this bra crisis and muddle around about climate change, oil prices, and nuclear weapons. They don't seem to care that the entire bra-wearing world is in an uproar. No wonder the world is such a mess.

My thought on this is that I have three bras that I bought with the +4 rule, and I can't say I am thrilled with the fit. In the future, I think I'll try something a little smaller.

The next step is easier. Cis women would now measure the fullest part of their best and subtract the band size from this measurement. That's the cup size. In other words, the cup size is just how far the breast projects beyond your chest. But we get to pick our sizes, and here's how breast projection maps to cup size:

These are American measurements, which are pretty standard up to the D size. If you are one of my European or Japanese readers, I refer you to SizeGuide.net for conversion tables.

If you want to look "typical" and not attract attention, you should probably not go larger than a "C" cup. If you are smaller than 5' 11" and slender (170 lbs or less), then a "B" cup might be a better idea. If you, like me, are interested in getting as much attention as possible, go for the cup size that makes that happen.

It's generally agreed that every two-inch increase in band size will drop the appearance of cup size by a letter for a specified projection. For example, a woman with a 38-inch band size has a DD size breast form (38DD). On a 40-inch band, it will look like a D (40D); on a 42-inch band, it looks like a C (42c), etc. So how do you decide what to get? If you've never worn breast forms and no place will let you try some on, stuff a bra, put on a t-shirt, and look in a mirror. Do you want more or less? Repeat as necessary.

When you shop for a breast form, you should see a chart similar to this for every product: 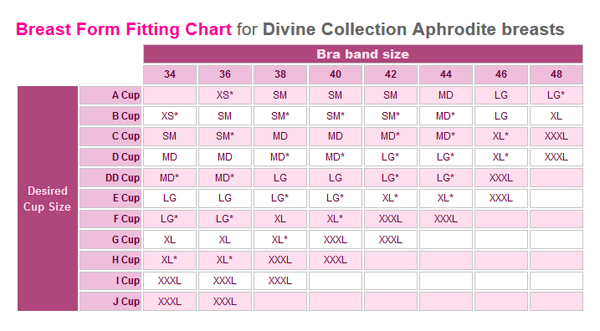 This particular one is for the Aphrodite breast forms. (We'll talk more about them in part 2.) These convert your band size and desired cup size into the manufacturers' size that will give you the look you want. If you have a band size of 38 and want to look like you have DD-sized breasts, find the row labeled "DD" and go to where it intersects with the column labeled 38, where you will find the size you need, in this example, "LG."

A size marked with an "*" means you should consider the next larger size. For example, the recommendation for 44 DD is "LG*." If you have a lot of breast tissue or fat, you will probably be fine with an LG. But if you have a large stomach or broad shoulders, an "XL" might be better for you.

Breastforms come as pairs of single breasts, breastplates, and breast shirts. They all have their advantages and disadvantages. Individual breast forms are less expensive, and you can position them wherever you want. Breastplates and breast shirts usually have more natural cleavage than it's possible to achieve with individual breast forms. Breast shirts don't require adhesive, but they are hotter than the other options. There is also a size limitation for breast shirts. I have seen breast shirts with really enormous breasts for sale. I would purchase these cautiously, as I doubt they would last very long.

Higher-end breast forms come in four shapes: oval, triangle, teardrop, and asymmetrical. The asymmetrical category is considered the most realistic, and the most expensive breast forms usually fall into this category. Asymmetric forms have different-looking right and left breasts - they are not interchangeable. They are usually shaped like an oval with a tip that narrows on just one side. The narrower tip is tilted diagonally toward the shoulder. These do look realistic, and if you have broad shoulders, they will help make them look smaller and more feminine.

There's not much to say about the other shapes. Pick the one you like the most. Triangle shapes tend to mimic a woman's breast with added droop. They often exaggerate the protrusion and look larger than other breast forms with the same size but different shapes. Teardrops are oval shapes with a pronounced tails. Oval shapes are for "nice girls." They fill out the bra but don't call much attention to themselves.

The back of the breast form should fit the curve of your breast. That's what the second measurement is for. You use this to help you choose single pairs of breast forms, perhaps somewhat also for breastplates, depending on their construction, and not at all to breast shirts:

This doesn't apply to all forms. For example, RealGurl's breast forms have an edge around the form for attachment, so this matters less for that kind of construction.

It's gotten more complicated. Manufacturers are now listing suitable bra types for their breast models. I wish I had the resources to try all of these out and let you know if I think their recommendations are reasonable, but I don't. It does seem convenient for them that the more expensive models work with more bras.

The easiest way to wear breast forms is with a pocket bra, which is certainly the best way to get started. These bras have built-in "pockets" to hold the breast form, so you don't have to worry about positioning the breasts or getting the right adhesive. Some breast form manufacturers also sell bras designed for their products. However, they might not be the most fashionable bras available.

OTR (Off-the-rack) bras can work but finding the right one can be challenging. There is a bra database that can be a real aid in finding a bra that fits you and your forms! It's called Bratabase. Many thanks to Emily Alt, trans beauty and bra lover, for this information!

I prefer to put on the bra, then insert the breasts into the pockets. It's certainly possible to do it the other way around. Oval, teardrop, and asymmetrical shapes have a narrower side that should point towards the underarm. The triangular-shaped breast forms should have the longest side (the "base" of the triangle) along the bottom of the bra cup. An underwire bra can be a good replacement for a pocket bra if you can find one in the right size. Wearing and sizing bras is an art unto itself. There's more information on this here.

If you are interested in using adhesives, go for it. There's a learning curve to that. I had some bad experiences with the plastic-enclosed silicone designs and adhesives. I could attach them fine, but despite using copious amounts of solvent, the plastic stayed glued to my skin and separated from the rest of the form. You might not have the same problem with the better forms available today. With solid silicone, this isn't an issue.

Breast forms are delicate. Store them in their original boxes, and treat them gently. It is also universally recommended that you do not sleep in them. I have to admit I always do that, by command of my Dom, and have had no problems with them. It is wonderful to wake up as a woman. But if you toss and turn when you sleep or sleep on your stomach, I can easily imagine you damaging the forms.

Thanks for reading, and if you have something nice to say or a good idea or suggestion, you can always write me!