Retinoids have been used since 1970 as an acne treatment, bringing a new use every year. They are applied in creams or found in tablets. Retinoid's benefits are legion:

Retinoids are the absolute gold standard for skincare. There are a few complicated issues, but we will sort them out here.

There are many different retinoids, but your skin can only use the active form, known as retinoic acid. This chemical binds to the retinoid receptors in our bodies. That's where it does all the magic of normalizing cellular renewal and repair processes.

The most potent retinoids are pure retinoic acid. With one exception (we'll discuss this more below), they are available only by prescription. There are two reasons for this. The primary one is that many studies have found that super-high oral dosages of retinoic acid can cause birth defects in rats. This result has been extrapolated to humans even though human doses are lower, and probably most of the human applications are topical, not oral. Many people think this is an overreaction, but no one wants to take the chance of causing birth defects.

The second reason is that pure retinoic acid can also irritate the skin.

Over-the-counter (OTC) or non-prescription retinoids are weaker because the enzymes in your skin must first convert them to retinoic acid. The amount of retinoic acid you get after the conversion differs for everyone. A typical estimate is anywhere from 0.5-2%. There are several conversion steps, and at each step, some retinoic acid disappears: 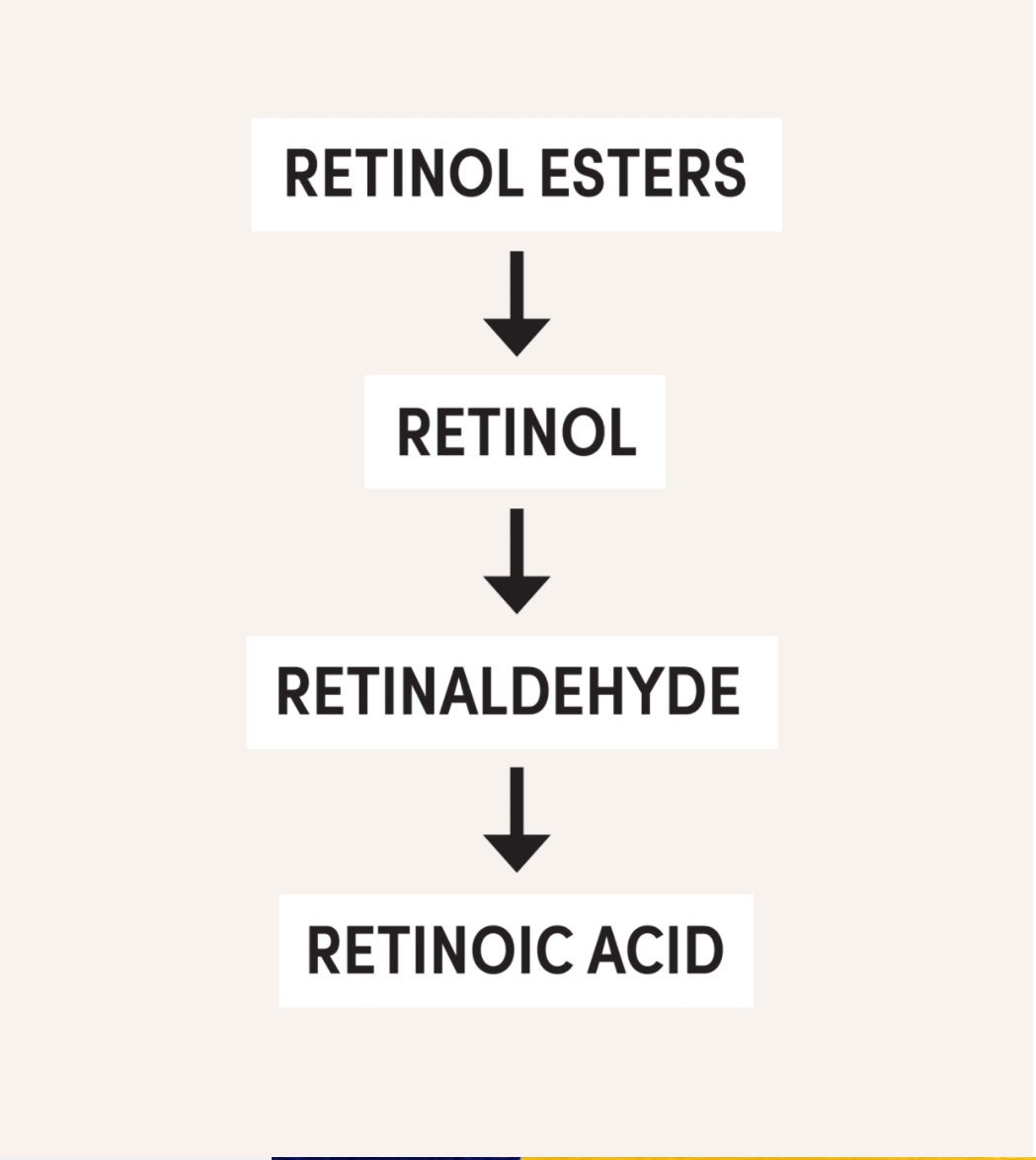 As you will see, it is possible to offer products that start later in the process and become stronger.

Retinol esters are the weakest form because they require three conversion steps before they turn into retinoic acid. If you have sensitive skin, this can be an advantage. The most effective ester is retinyl propionate. Retinyl palmitate is the next best choice. As usual, while less irritating, they are also less effective.

I've never used these, and I don't have any product recommendations. There are products available. If you are interested in retinol esters, I suggest you do some label reading at your drugstore.

Retinol is the most popular over-the-counter retinoid. Since it is already at stage two of the process, it only goes through two conversions before it turns into retinoic acid. As a result, less retinol disappears during conversion, making it more effective. Retinol causes the same skin changes as retinoic acid but takes longer. It is estimated to be 10 to 20 times less potent than retinoic acid.

It is significantly more drying and irritating than the esters. Starting slow and working up in application and concentration is the key to getting your skin to tolerate retinol.

Retinol creams are easy to find. They are everywhere. The Ordinary has the following concentrations and amounts:

As the concentrations increase, the risk of irritation also increases.

The Ordinary's retinol products are mixed with Squalane. You might not have heard of Squalane; I certainly never had. It is a plant-derived oil that is very hydrating. I find it a bit oily on my skin and wouldn't want to wear it publicly. But that's not a problem since I only use retinol at night.

One important note about The Ordinary's retinol formulations: Retinol is a pretty unstable molecule that degrades quickly. One of the reasons The Ordinary's products are cheaper than other companies is that they don't include some of the stabilizers you find in more expensive products. The Ordinary recommends that you keep their Retinol products refrigerated.

NOTE TO EU READERS: You can now get retinol in the E.U. from any source. However, the Scientific Committee on Consumer Safety published an opinion (April 20, 2016) recommending that cosmetics should contain only 0.3% Retinol. If this is or becomes an issue, consider the Retinoic Acid Esters described below.

Please note that these are not the same as Retinol Esters. These are significantly stronger. They are a new generation of over-the-counter retinoids. There is not a lot of data on them yet, but they show great promise. One type is retinyl retinoate, which breaks down into both retinoic acid and retinol. That makes it active within one step. Studies have shown (at least so far) that retinyl retinoate supports collagen synthesis eight times more than retinol. It is also more effective for treating wrinkles and works on mild to moderate acne by fighting bacteria and reducing sebum production. It is well-tolerated and less irritating than other retinoids.

The other type of retinoic acid ester is hydroxypinacolone retinoate (HPR) which is often called "granactive retinoid" by cosmetic companies. Granactive retinoid is a complex that includes the active ingredient HPR in a 1:10 ratio with a solvent (dimethyl isosorbide). To find the actual concentration of HPR, divide the percentage of granactive retinoid by 10.

HPR binds directly to retinoid receptors, so its activity is similar to pure retinoic acid. It is fascinating that it is not only less irritating than prescription retinoic acid products but also less irritating than 0.5% retinol (the lowest retinol that would be effective!). Right now, all the research comes from the manufacturer, who finds that HPR significantly reduces wrinkles, age spots, and sun damage. Another study found it has more significant levels of gene expression than retinol. With all the studies coming from the manufacturer, some bias is undoubtedly possible, and a bit of skepticism is reasonable.

This second product is quite interesting since it contains not only a 2% concentration of HPR but also some pure retinol in a capsule delivery system.

Unfortunately, there are no studies. Even comparing these products to retinol is impossible because the molecules are different. I am looking forward to trying both of these products.

Granactive Retinoid is more stable than retinol, so you might not need to store these products in the refrigerator. However, note that the 2% emulsion contains retinol, so you should probably refrigerate that product.

NOTE: You can get HPR over the counter in the U.S., U.K., and Australia, but Canada considers it a drug.

Adapalene at a 0.1% concentration was previously prescription only but is now available over the counter. It binds directly to some (but not all) of the retinoid receptors in our skin without conversion. It is highly effective at treating acne. Some studies show it is better tolerated than Tretinoin (see below). It is not clear whether or not it will demonstrate the anti-aging effects of the other retinoids.

OTC Adaplene is found as Differin, ProactivMD Adapalene, and La Roche-Posay Effaclar Adaplene. These are all gels.

If you want stronger Adapalene at 0.3% concentration, you will need a prescription. The effects are the same as above.

No concentration of Adapalene is available OTC in the UK, Canada and Australia.

This is famously known as Retin-A. Since it is pure retinoic acid, it is approximately 20 times more potent than retinol.

Since it is much stronger, it is also much harder on your skin. Irritation, dryness, peeling, redness, and even swelling are not uncommon. There's also the risk that tretinoin-induced inflammation can lead to hyperpigmentation.

This is the most potent topical retinoid. Like Adapalene, it only binds to some of our receptors where it is immediately active (no conversion required).

It is best known as the brand name Tazorac, a prescription medication for psoriasis and acne. It works better than Tretinoin for these conditions, although there's controversy about whether it is better or worse than Adapalene.

It has similar side effects to Tretinoin and is more irritating than Adapalene.

Trifarotene is the newest retinoid (the first new one in 20 years). It only became available in the U.S. last year. It targets only one retinoid receptor (the most common one found on our skin). It is, therefore, gentler than the other prescription retinoids. Advertisements describe it as an acne medication. I can't find any mention of any of the different effects of the other retinoids.

It is less irritating than Tretinoin and Adapalene. If you have acne and have had trouble with these retinoids, give this one a try.

This is also known as Accutane, and you take it orally. It has many serious side effects, including cheilitis, tiredness, eczema, headaches, joint pain, bone disorders, and anemia. Users are also at higher risk for depression, suicide, and inflammatory bowel disease. For all these reasons, it is only prescribed when all else has failed.

I'm not sure this one is worth the risk.

This brings us to the end of our drug/acid survey. In the next installment, we'll discuss how to start incorporating them into your life. Don't miss it! Meanwhile, if you have comments or questions, please send the nice ones to me!